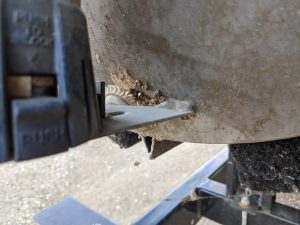 Earlier this month a zebra mussel infested pontoon was stopped from entering Lake Audubon near Coleharbor, North Dakota. Lake Audubon is managed by the U.S. Army Corps of Engineers, is fed by waters from adjacent Lake Sakakawea, and is home to the Audubon National Wildlife Refuge. The inspection and subsequent decontamination by North Dakota Game & Fish Department officials prevented the introduction of the invasive aquatic nuisance species (ANS) into the lake but highlights a real and growing threat.

In response to the news, Terry Fleck, chairman of the Friends of Lake Sakakawea, released the following statement on behalf of the organization:

“We got lucky this time but luck is not a strategy and time is not on our side. Aquatic Nuisance Species is the greatest threat facing North Dakota’s waterways. Other states, most notably our neighbors in Minnesota and Montana, are taking proactive and preventative steps with state mandated inspections, check points, and costly fines. The Friends of Lake Sakakawea has long advocated for the State of North Dakota to do the same. Instead, North Dakota is relying too much on the honor system.

“We are grateful for what the North Dakota Game and Fish Department is doing to deal with this threat. Unfortunately, they are working with limited staff and resources. It takes state and federal policymakers and leaders to make ANS a priority and to allocate the funds and personnel necessary to combat ANS. Unfortunately, this is not the case. As a result, our fisheries, wildlife habitats, a multi-million-dollar recreation industry, the municipal water systems of central and western North Dakota communities, and the hydro-electric capabilities of Garrison Dam are being needlessly threatened.

(Source: KX News) – According to the State Parks...
Read More