(Source: Associated Press & Minot Daily News) — After overseeing the production of more than 245 million walleye and bringing back pallid sturgeon from the brink of extinction in the Missouri River system, Rob Holm, Garrison Dam National Fish Hatchery manager, has made important and lasting contributions to fisheries in North Dakota and elsewhere. 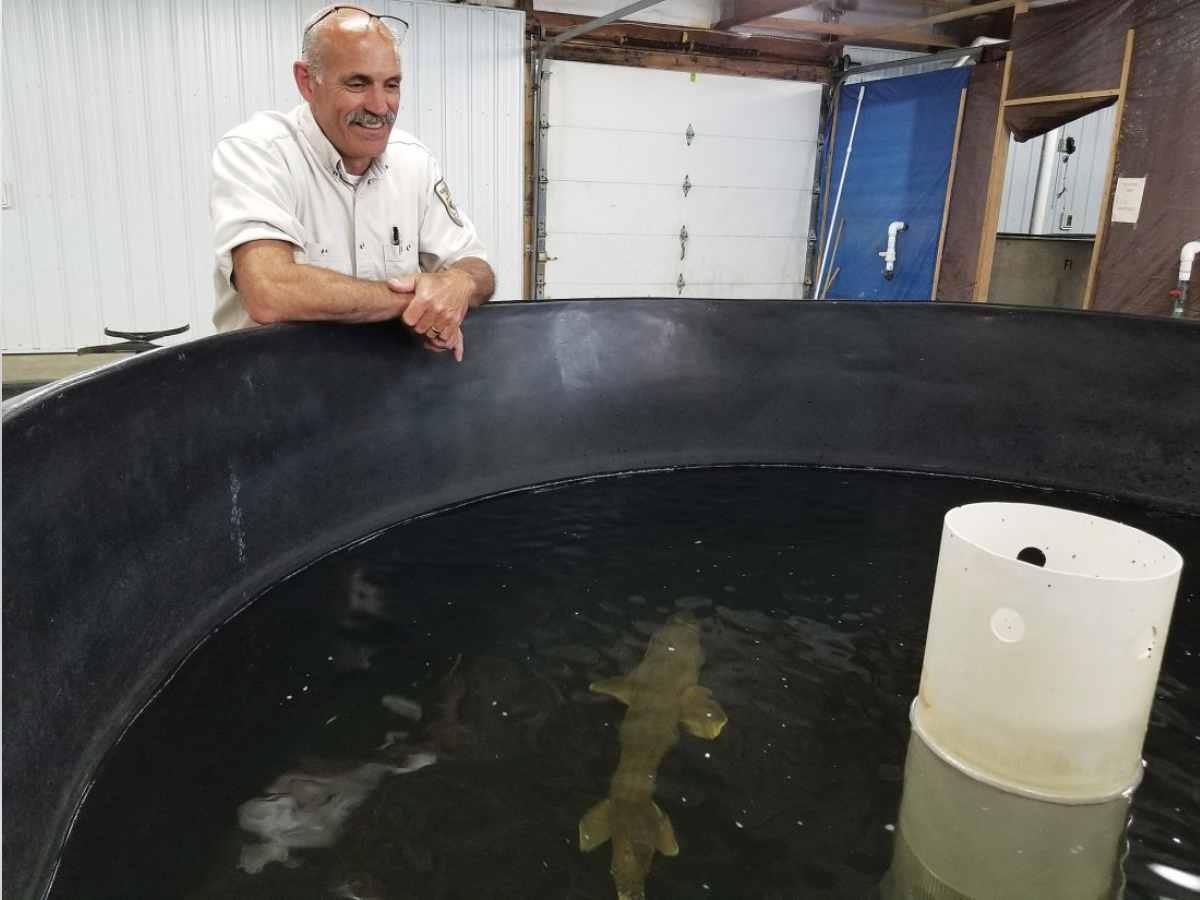 Effective June 30, Holm is retiring after 25 years of capturing, spawning, tagging, incubating, and caring for many species of fish. He became a nationally recognized leader in pallid sturgeon recovery, helping save the prehistoric fish from extinction.

“My professor at the University of South Dakota, Vermillion, was big on pallid sturgeon,” recalled Holm. “Pallids became a passion for me early on.”

After graduating with a degree in biology, Holm found himself working in fisheries in Oklahoma. It was there where he helping raise striped bass for release on the Gulf Coast and assisted with paddlefish restoration in Kansas, gaining knowledge that would later prove vital in North Dakota, the Minot Daily News reported.

“We got that going and were stocking out paddlefish. It was kind of cool to be able to do that,” recalled Holm. “At the same time we had a huge program for catfish, flatheads and channel, smallmouth and largemouth bass as well. We did a lot of recreational fish.”

Holm took the job as manager of the Garrison Hatchery in March 1996. The facility was vastly different than it is now. Pallid sturgeon had been listed as “endangered” just three years earlier and there was a very real possibility that the river monsters would soon be gone entirely from the Missouri River system. A series of dams on the previously free-flowing river made it impossible for pallids to swim upstream to spawn. Essentially, the population was dying from old age with no natural reproduction to replace older fish.

“The first thing I did when I got here was get the trout barn going,” said Holm. “We put a concrete floor in there and soon became the number one producer of pallid sturgeon in the United States.”

It wasn’t easy, with some real highs and real lows early in the process. The first attempt at capturing pallids for artificial spawning resulted in just one female being brought to the Garrison Hatchery. Saving a species is not easy, but biologists hoped this was a start.

“I remember that female and when we spawned it. It was like high 5’s for everybody about 10 o’clock at night, like we had just saved the world!” remembered Holm.

Later that night an underground pipeline carrying warm water from a hatchery boiler burst. When Holm and fellow fisheries biologists checked in on their incubating pallid sturgeon eggs the following morning they discovered frost on the incubators. All of the pallid sturgeon eggs were lost. 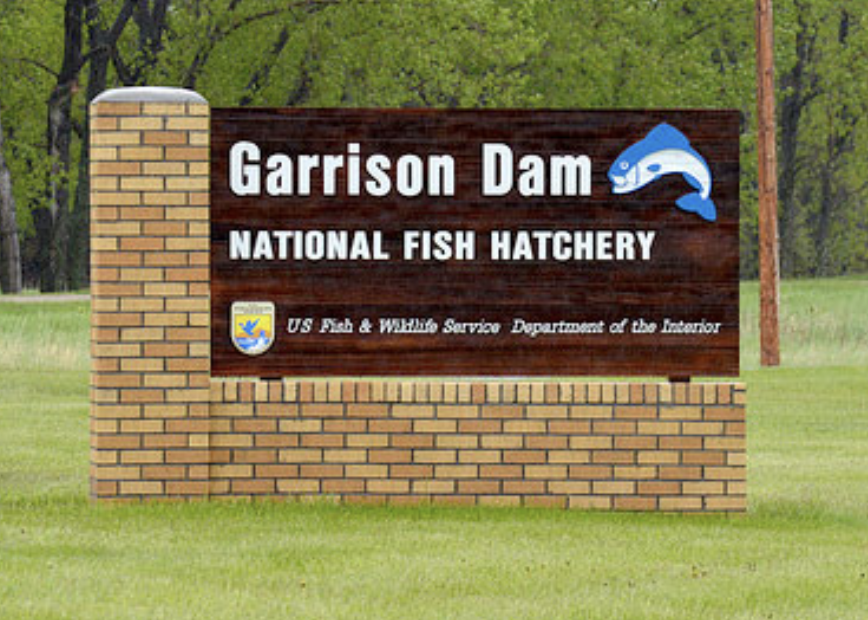 In several years to follow though, early problems with pallid restoration were overcome. The Garrison Hatchery, with Holm’s hands-on guidance, has stocked out thousands of pallids that brought up the numbers of the large fish that was in serious peril.

Another project that showcased the importance of the Garrison Hatchery was the restoration of sauger in the Wind River in Wyoming. Once plentiful, they were disappearing. The population was so low that biologists and fishermen thought the end was in sight for Wind River sauger.

“That was something I thought was kind of a neat challenge,” said Holm. “That’s an example of what hatcheries can be. We got into that program and, after four years of stocking, the fish were recovered. Last year they said they were getting recruitment and didn’t think they needed stocking anymore. It shows you can take a fishery and, in a short period of time, can make a difference.”

While pallids were an early passion for Holm, he quickly learned after arriving in North Dakota that walleyes were in big demand and that the hatchery would be asked to meet that demand. It was a huge undertaking.

“The year before I got here it was like 100,000 walleye,” recalled Holm. “Game and Fish asked me if I had ever raised walleyes before. I said no.”

Game and Fish was financially contributing to the Federal Hatchery in a cooperative agreement with the USFWS.

“We got a request for 8 or 9 million walleyes,” said Holm. “We’ve been fortunate. Our production has pretty much mirrored what the requests have been ever since, with the exception of a couple of years when we lost fish because of flooding on the outdoor ponds.”

Studies have shown that fishing in North Dakota is a $950 million industry and that many of the walleyes caught in the state came from the hatchery along with all the trout and salmon.

Holm has also been managing smaller hatcheries at Valley City and Bald Hill. Despite their size, says Holm, they too make important contributions to state fisheries.

“Now with Red River restoration and Lake Sturgeon taking off over there, it’s a big win for the FWS,” remarked Holm. “One day I’d like to see my grandkids fishing lake sturgeon over in the Red. It’s possible.”

Many such success stories remain somewhat hidden from the general public. Holm has long recognized that and has realized the importance of telling the story of fish hatcheries.

“When I came here our visitors center was so stuffy people would pass out in there. I saw a bunch of mounted fish behind glass. Half the tanks in the building were empty and no eggs in the incubator. What would you think?” said Holm. “You’d think they don’t do a whole lot.”

Holm determined that reaching out to the public was necessary and took steps to do so. Today a large visitors center at the Garrison Hatchery is used for school tours, classroom gatherings and tells the hatchery story to anyone who steps inside.

“It gives us and our volunteers to show kids and whoever comes in what we do,” said Holm. “We added a larger aquarium with the idea of having larger fish. When kids and others see our live fish, that’s what gets them going.”

While Holm will be stepping aside from his career at the hatchery, the Riverdale resident doesn’t plan on leaving the area.

“I like it. For sure,” said Holm. “We’re Riverdale residents for life. The hatchery has been my career. It’s been my life. I’ve come to a point, like in professional sports, you’ve done as good as you can but you reach a time for somebody else to take the reins.”

Holm says he has been fortunate to have an excellent staff working for him at the hatchery. Maybe too good.

“They understand the place,” said Holm. “Now I’m sitting behind a desk more and doing administrative stuff, not really my thing. It’s more fun to be out with the fish. I am a biologist.”

As for the hatchery’s lengthy partnership with North Dakota Game and Fish, Holm called it “amazing” and says “this kind of model for all the states would be a win-win for everybody.” 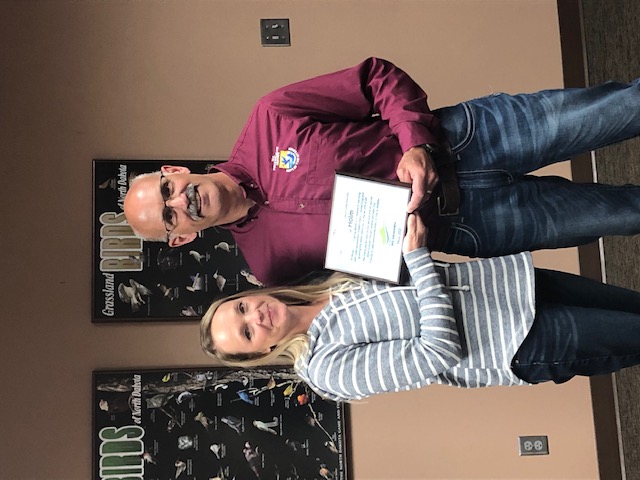 The Friends of Lake Sakakawea Board Member Kelly Sorge presented Rob Holm with ‘The Tolly’ during the FOLS spring board meeting on May 19, 2021 in Bismarck.

The FOLS recognized Holm for going above and beyond in working with Lake Sakakawea’s stakeholders in protecting and growing the lake’s resources to the benefit of all.

‘The Tolly’ is the Friends of Lake Sakakawea’s highest honor. It is awarded by the FOLS Board of Directors to individuals who have made significant contributions to the betterment of Lake Sakakawea. The award is named in honor of Sorge’s late mother, Tolly Holtan, who was an outdoor enthusiast, lake advocate, and founder of Indian Hills Resort.