Bob Valeu really was present at the creation of the Friends of Lake Sakakawea.

As state director for U.S. Senator Byron Dorgan from 1993 through 2008, Valeu was deeply engaged on water policy and economic development issues.

“I was working on behalf of Senator Dorgan who was dedicated to protecting Lake Sakakawea and Lake Oahe. The senator was constantly fighting against downstream senators who wanted to sacrifice our lakes on behalf of their navigation. We battled some very powerful interests,” remembers Valeu. “We often worked with the Corps but sometimes the senator fought the Corps.”

“Here we were working on recreation, access, water levels, fisheries, development, you name it, and the whole time no one was there in any official capacity representing the interests of Lake Sakakawea,” said Valeu. “Every interest group and agency was at the table but anyone there from Lake Sakakawea was on their own. It was then we realized Lake Sakakawea needed an organized and dedicated advocacy group.” 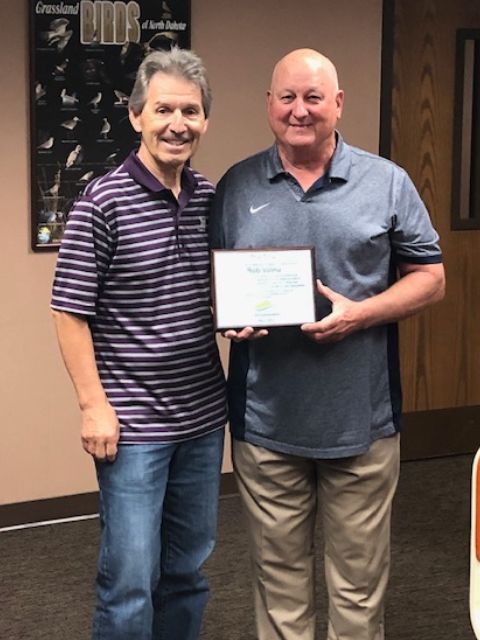 “We talked about an organization for many years. There was, as I recall, an unofficial group that participated in discussions and engaged with Senator Dorgan and the Corps. The low level years in the early 2000s really served as the catalyst to formally organize the Friends.”

Valeu retired from Senator Dorgan’s office in 2008 and joined the Friends of Lake Sakakawea board of directors later that year. During his 13 years on the board, Valeu has dedicated his energies to protecting the lake’s ecosystem, guaranteeing access, and advocating for the creative development of the lake’s economic and recreational potential.

“The lake is personal to me. My family owns a cabin by New Town. I’m an avid walleye fisherman. I can’t imagine North Dakota without Lake Sakakawea,” Valeu notes. “We have to protect this great resource and leave it better than when we found it but we also need to think big.”

One issue Valeu is passionate about and wants to see developed is a north shore “super-marina.”

“We need a major marina near New Town where boaters can refuel and dock their boats. If developed right, such a marina would have a real positive economic impact on the north shore and benefit everyone from Williston to New Town and south. I hope to see it happen. It’s certainly needed.”

Earlier this year, Valeu decided to step down from the FOLS board saying, “I’ve had good run but it’s time for some younger blood and new ideas. I’m at the point now where I want to spend as much time as I can out on the water and with family and friends.”

Valeu adds he still stay involved by advising the board from time to time on various policy issues.

“Bob is a tremendous resource. No one has the energy and ideas like Bob Valeu. We really wouldn’t be here today if it weren’t for Bob’s leadership and dedication. In many ways he’s been a best friend to Lake Sakakawea,” says Terry Fleck, chairman of the Friends of Lake Sakakawea.

Fleck presented Valeu with ‘The Tolly,’ the organization’s highest honor, during the FOLS board of directors’ May 19th meeting in Bismarck. The award’s inscription reads…

Fleck says the inscription perfectly describes Valeu’s contribution to the Friends, but it’s the quote from Socrates, inscribed at the bottom of ‘The Tolly,’ that perfectly captures Valeu’s spirit: “The secret of change is to focus all of your energy not on fighting the old, but on building the new.”